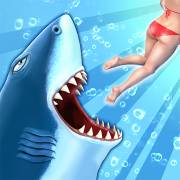 Control a hungry shark and try to survive as long as possible by eating everything in Hungry Shark Evolution! It is a very addictive Action and Arcade game developed by Future Games of London. Choose different sharks from Great White to Hammerhead! Battle enemy sharks, submarines and other creatures in the deep sea! Your target is to unlock the Great White Shark quickly - it's the largest and deadliest of the sharks in Hungry Shark Evolution. Players need to feed it up and make it become a ten-ton killing machine. Here are some tips you need to know for Hungry Shark Evolution: Before you start the game, make sure you watch the free video trailers for extra coins and gems. Find out the giant crabs in dungeon entrance gates for the big boss fights. Get yourself a baby shark. You can get one by purchasing it with coins or gems. Collect all the goodies in the Daily Reward Treasure Chest every day. Take advantage of the Gold Rush. Features: Amazing 3D graphics Unlock 12 kinds of sharks Intuitive touch Compete over 75 missions Get your sharks great items and gadgets Sync all the game data with

Take control of a very hungry shark and then run wild through the ocean, eating all the food and everyone in your way to live as long as possible! Explore the beautiful underwater world and evolve iconic sharks like the Great White and Megalodon!

In this action-packed aquatic adventure, you can.

-Unlock more than a dozen unique sharks and other fantastical creatures

-Explore the open world above and below the waves

-Discover and devour mysterious creatures from the depths

This is a game of hunting by controlling sharks. There are 12 types of sharks in the latest version of this game. There can only be one at the beginning, and the next shark can be purchased after the previous one has reached level 10. The next shark's blood, rate of eating fish, sprint value is often stronger than the previous one, but also can eat to increase the number of food that the previous shark can not hunt, the only thing that remains the same is the speed of blood deduction.

In this water action adventure, control a very hungry shark. Eat all the food on the way as much as possible to survive.

Grow and develop your shark to make it bigger and better. Use the 3 attributes that increase with you to upgrade

Fight for survival against huge bosses and other dangers of the abyss. Shark fins, toxic waste, rocket-launching submarines, and even a "giant crab"!

Each shark has a set of missions to master, and a few hidden objects to dot the map.

Touch the screen when moving to accelerate (Boost), but the acceleration effect needs time to recover when exhausted (automatic recovery, do not need to rely on predation to recover). Some fish in the game are gold in color, so you can increase the gold by eating such fish or completing the tasks, and the gems are obtained by eating jeweled fish or using specific methods. Money is used to buy basic props and sharks, while gems are used to buy stronger props and unlock new sharks directly without money, or to revive dead sharks by consuming gems.

The hungriest game is back to rule the ocean! Dive into a beautiful 3D aquatic adventure! From the bottom of the shark food chain to resisting extinct large predators, experience the life of sharks intertwined with amazing sea creatures! 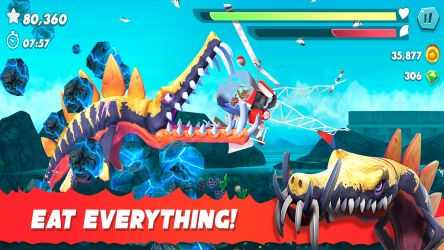 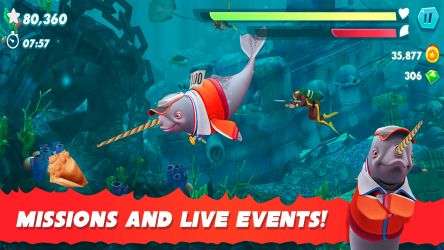 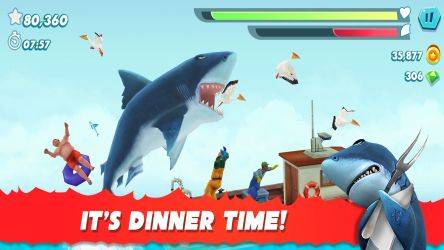 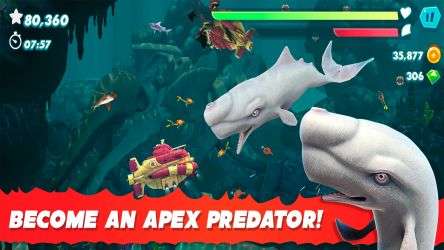 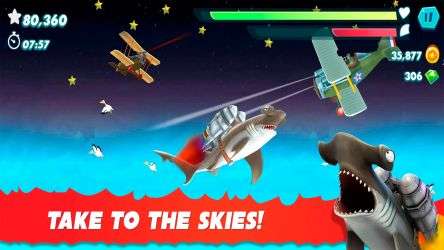 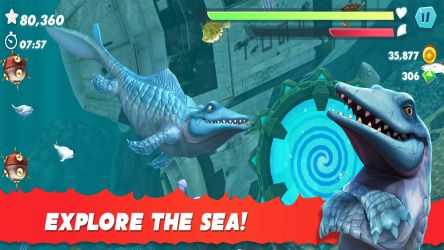