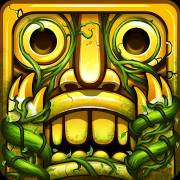 As a redefined mobile game, Temple Run has gained millions of joins. And now the brand new Temple Run 2 is ready for you to explore. Get more energy here, have fun running and jumping in Temple Run 2! This app gives much more beautiful graphics and organic environments. New obstacles are waiting for you to break down. More powerups, more achievements, and more excitement. Each character has its unique powers, which makes the game more enjoyable than ever. And we have a bigger Monkey in Temple Run 2. Users can log in to Facebook to become a fan and follow the official account on Twitter to get more information about the updating news. Join it now and have fun! Temple Run is the first one parkour game. Among all of the different parkour games, the most popular one is the Temple Run. As the sequel of Temple Run, Temple Run 2 will log in the system of Android and iOS to continue its legend. Sound: comprehensive upgrade In the aspect of the game sound, the sound of Temple Run 2 is more realistic than the first generation. The processing technique of different scenarios is more exquisite. Gameplay: more rich and varied Compared with the first generation, Temple Run 2 increased many different elements including the wire rope, cliffs and trap. Temple Run 2 is more complicated than the first version and players need to keep their tension all the time. Game control: simple and smooth In the sequel version, players can have a smooth control of the game. The actions in this game are only jumping, falling and moving around. Features In each adventure game there will be always such a scene that the hero finally will get the treasue while he needs to wander in the jungle and defeat the trap of the maze. You can see the features introduced below:

◆ More achievements you can get

◆ Each hero has a special skill

The controls and plot of "Temple Run 2" are similar to its predecessor, but new obstacles are introduced and set in new locations where the protagonist must escape between temples, jungles, mines and rivers, and the route is changed from the original straight line to a curved route where the character moves at a faster pace. The game also replaced the three "demon monkeys" of the previous generation with one large monkey.

The player's goal in "Temple Run" is to run as far as possible by avoiding randomly generated obstacles. And get the most points and coins possible. The longer the player survives, the more points they will earn. The player's score can only be used to reach the goal.

Players can collect gold coins while escaping. The gold coins are shaped like diamonds and are divided into yellow, red and blue, worth one, two and three dollars respectively. When the player collects gold coins, the bonus meter on the side will also increase. Whenever the player collects 100 gold coins, the reward meter will go up one level until the fourth level, which can increase some points, and then start from the first level after the increase. The coins collected by the player can be used to upgrade different items, rewards, buy characters and wallpapers. 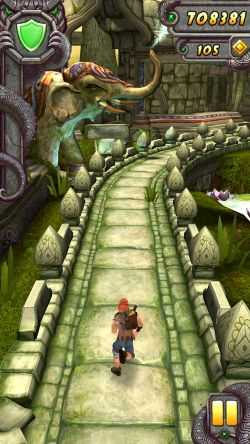 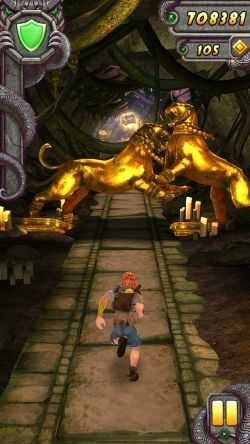 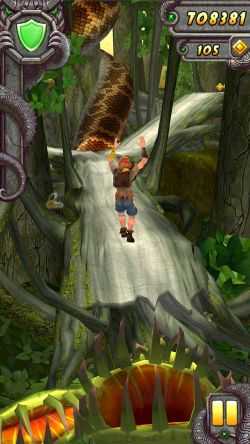 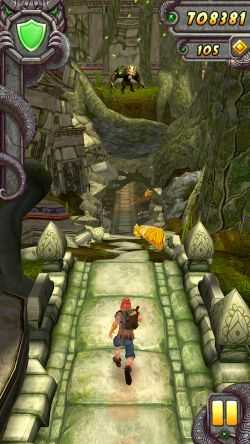 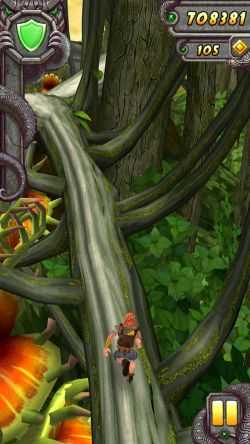