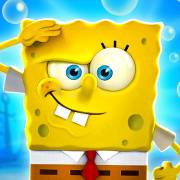 SpongeBob SquarePants: Battle for Bikini Bottom is a platform video game based on the Nickelodeon animated series SpongeBob SquarePants, developed by Heavy Iron Studios, AWE Games, and Vicarious Visions, and published by THQ. The game was released for the PlayStation 2, Xbox, and GameCube consoles as well as separate versions for Microsoft Windows and Game Boy Advance. While the versions released for consoles were 3D platform games, the Microsoft Windows version of the game is a mini-game compilation, and the Game Boy Advance received a 2D platformer version.

All versions of the game feature an original storyline, in which the player attempts to defend Bikini Bottom from an invasion of robots created by Plankton with a machine called the Duplicatotron 3000, playing as SpongeBob in all versions, as well as Patrick and Sandy in the console versions. The series' voice actors reprise their roles, with the exceptions of Clancy Brown as Mr. Krabs and Ernest Borgnine as Mermaid Man, with both roles instead being voiced by Joe Whyte. The game was released on October 31, 2003,in North America and in Europe on November 28, 2003.

Battle for Bikini Bottom received mixed or average reviews according to Metacritic. Edge included the Game Boy Advance version on its list for top handheld video games of the 21st century. It was a commercial success. The game has gained a cult following and a large speedrunning community presence.

A remake of the home console version, titled SpongeBob SquarePants: Battle for Bikini Bottom – Rehydrated, was released on June 23, 2020. It was developed by Purple Lamp Studios and published by THQ Nordic for Nintendo Switch, PlayStation 4, Xbox One, and Microsoft Windows. It includes a multiplayer mode and cut content from the original game.

The core gameplay consists of collecting items and defeating robots that attack various areas of Bikini Bottom while traversing platforms and avoiding environmental hazards such as spikes and flames. Some areas require different characters to defeat, as each character has their own unique abilities. Players can control SpongeBob SquarePants, Patrick and Sandy. Switching characters in the console version requires the player to find a bus stop, using which the current character will switch to another character, and using it again will switch back to the previous character, allowing the player to choose two characters per level. The default character for the entire game is SpongeBob SquarePants; Sandy and Patrick do not share any levels as playable characters.

The game is a 3D platformer that requires players to collect three main types of items. "Shiny Objects" are the game's currency and can be used to pay for passes in the game area or to buy gold shovels from Mr. Krabs. [2] 'Golden Spatulas' are used to grant access to new areas, are hidden throughout the game, and can also be obtained by completing tasks set by Squidward Tentacles, as well as several other characters in the cartoon. Patrick's "socks" are also spread throughout the game, and he rewards SpongeBob with a gold shovel in exchange for his 10 socks. SpongeBob can also blow bubbles to form different shapes as special attacks/actions that can be used to develop further in the game, and can learn two new bubble actions from his bubble buddy as the game progresses.

Props are also included in the game. The trampoline helps the player bounce further onto ledges or platforms, buttons activate certain things throughout the game, and the pressure pad acts like a button; however, its effect only works when the player is standing on the pressure pad, or has another object placed on it. Once anything on the pressure pad is removed, its effect disappears. There are also character-specific abilities, such as Sandy's ability to swing from a Texas hook, SpongeBob's ability to dive down with a bungee hook, and Patrick's ability to pick up and throw melons called "throw fruit" and ice cubes called "freeze fruit". While some areas can be navigated by any character, certain areas can only be done by specific characters because each area has unique abilities. SpongeBob can make a bubble helmet for head-butting enemies. Patrick can throw objects at buttons, robots, and pressure pads, and can throw "frozen fruit" into slime bodies to freeze them. Finally, Sandy can slide through huge gaps and destroy enemies and objects with her lasso. 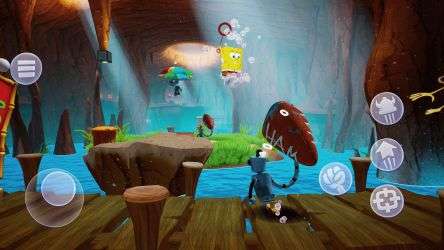 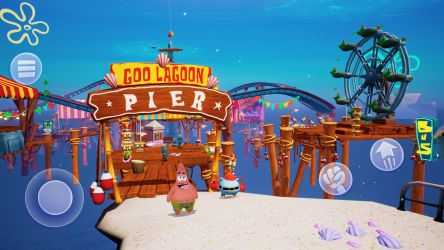 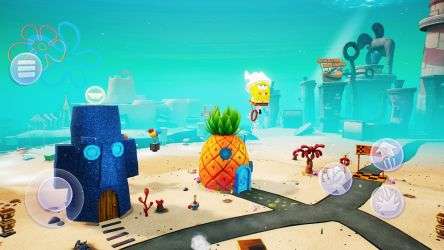 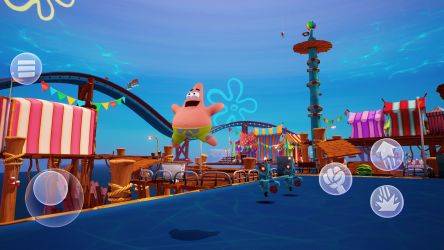 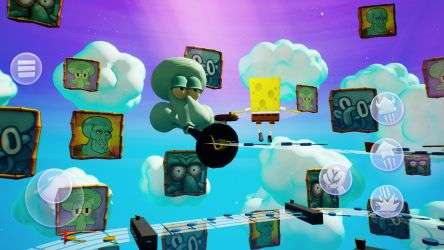 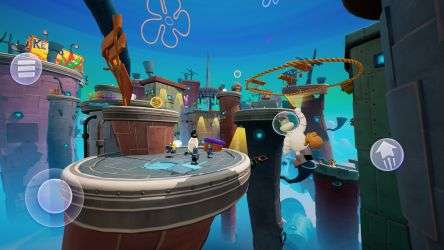